We left Syd and Max about to launch into some repartee on the late Solomon King…so let’s continue…Syd had suggested ‘She Wears my Ring’ got to No.1.

M.C. We played some terrible tricks on him because he was so full of himself….’the big three – Tom, Engelbert and me’

Where had Gordon (Mills, who managed all three) found him?

M.C. I haven’t a clue but we got lumbered with him

He wasn’t looked after by Colin Berlin at the beginning, but he took him on after She Wears my Ring.

I expect  that as Tom and Engelbert were both on Decca, EMI said ‘we’d better have this one.’

I don’t think Gordon brought him to EMI did he?

M.C. Did he manage him aferwards? This guy Jack worked at EMI – I never knew him – he introduced himself to me on this cruise; he was a lot older than me, probably 70 or something like that and he said ‘I was at EMI when you were’ and we got talking and he knew you (Syd). He said ‘I was responsible for EMI signing Solomon King’ but how he came to hear him, I don’t know

We’ve had this conversation before and of all the people you’ve worked with, this guy is the one you talk about.

We talk about him all the time – his ears must be burning.

M.C. It was hysterically funny. Don Partridge was a real character. It was an exciting time – Cliff, The Beatles, then later Berry Gordy came across, Smoky Robinson and Motown started up – it was a wonderful time

Gene Vincent came over – he’s talked about in very hushed terms now, but he was a very nice guy. Dinah Washington came over – all the jazzers, Oscar Peterson

Colin Burn said he had to drive everyone around in his Mini.

I can remember Bobby Vee coming over.

Those were the days when you could happily invent stories

That’s where he learned it – he’s doing it now all the time.

M.C. I must have learned before then – I hit the ground running. It’s like Don Partridge and ‘Rosie’. The stories I used to make up about this Rosie, this romantic woman. Rosie was a little transvestite who used to be in Soho. He used to run up to you and say ‘I’m Rosie, give us a kiss.’ and run off. That’s who Rosie was when Don was busking in the streets.

We used to have some wonderful press receptions. You remember Johnny Preston – Running Bear? We had a bear from Chessington Zoo. The reception was at the 100 Club, downstairs in the basement and we were taking this bear along Oxford Street with a collar – there was people everywhere. We got it down in the basement and some of the guys started feeding it beer and it got pissed.

The Temperance Seven – we hired a camel from Chessington Zoo and I can’t remember the song – Desert something..Sahara? We arranged for a parking space to be kept free in Manchester Square. I came along and we had this bloody camel tied to a meter. All the traffic was piling up and one bloke got out and went to see what was going on. He went back to his car and the guy in the next car said ‘what’s up mate?’ He said’there’s a camel up there’ and the bloke almost hit him.

Another time I had to go round with seven dwarves – now why was that? They had these marvellous heads that came over from Disney. We found seven little actors and we had Snow White dressed up and we marched these dwarves all the way round London. I remember coming up to Manchester Square. There was a guy walking round the corner and he suddenly came across Snow White and seven dwarves and he never even batted an eyelid, didn’t even look at them; just stared ahead and walked past. The great British conservatism! Then there was Itsy Bitsy Teeny Weeny Yellow Polkadot Bikini when we had a girl in that bikini and took her up and down Regent Street with cameras. Some of the things we got up to were extraordinary.

M.C. There were so many people coming ito EMI all the time. You had all these press releases, so you’d take one out of the drawer, alter a couple of words and put your name at the bottom instead of Brian Mulligan or whoever. I seems to remember we had to write biogs on two or three different people every week.

It was a marvellous business to be in as far as PR is concerned, because you didn’t have to mention the record label. It wasn’t like getting promotion for Shredded Wheat.

M.C. Where we used to win a lot was with the provincials. We did well with the nationals because we had a lot of good people,but because he’d (Syd) always cultivated the provincials, they used to be phoning us.

What we did with the provincials – I didn’t want them to think thet all we were concerned with was the nationals. The provincials were very important. I made sure I went out and visited them.

M.C. He used to go out laden with all the best albums

If we had someone like Bobby Vee coming in, we’d say ‘Right, we want you in the office.’ and we arranged phone calls all around the country. These guys would be tickled pink to think we were putting a star on the phone. 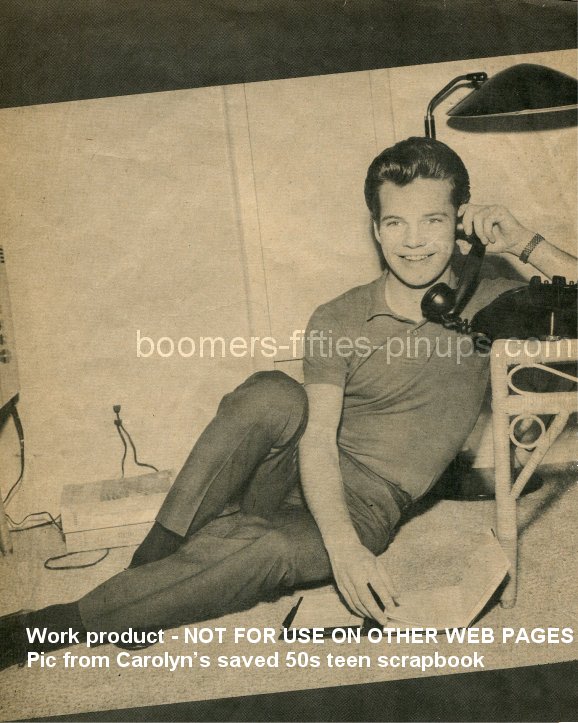 Bobby Vee – thanks Carolyn, and apologies!!

So you hired this guy then? (Max)

I think I advertised for someone. I got a lot of letters because it was the sort of job people wanted.

M.C. No, I’ll tell you how it came about, Syd. I was on the Merton & Morton News – I’d started a record column. You contacted me and offered me a job at EMI. I’d left by then and joined the Croydon Advertiser. I think I joined on the Monday and gave my notice in on the Friday. They said ‘we’ve obviously impressed you! He (Syd) said ‘I know you’re going to be good at damage limitation, so will you come and join us on the understanding that you watch out’. And it worked from day one. That’s how I got involved and that was 1962 when The Beatles were just about to start. I’ve got a picture in my office of me with them on the steps of EMI. It’s my best feature – it’s my back! George Martin and myself on the steps into the garden. I’m guessing that would be about six weeks before Love me do.

M.C. I think it got 19. To me the people who were the real stars were the Nat ‘King’ Coles and those kind of people. The Americans got the big star treatment..this Liverpool thing happened of its own volition. Everyone at EMI got gee’d up about them when it started to take off, not the other way around. I do interviews and they talk about The Beatles and they say ‘Oh, so you were in at the beginning’ and I say ‘no, I didn’t do a bloody thing. I was just there and sent out a press release’. They did it and we rode off the back of it. That’s how it was

I don’t think they had press people then

You remember the record they made in Germany – My Bonnie lies over the ocean – we turned it down. I think we were getting so much in with all these releases that it was impossible to take in what was going to be big and what wasn’t.

Final part next time when we move to Max and Syd’s life beyond EMI, and who knows what else! Oh, and if anyone can shed light on who this Jack was who claimed the Solomon King credit…I know we’d all like to know.

Text © David Hughes, 2017. Photos from Google search are for illustration only, Carolyn!