A pause for a holiday, and now we return to Colin Burn and having set the scene for his arrival at EMI in the late 1950’s, I asked him what his job actually entailed.

” The big programme of the week was Two Way Family Favourites.. If you had a Two Way Family Favourites, the very next week the record was a hit. If you didn’t, the record was a stiff – it was really that cut and dried. We had to concentrate, go and see Bill Crozier in Cologne. Jean Metcalfe over here had a producer, but Bill didn’t because he was working for the BFPO (British Forces Posted Overseas), you’d do the trip – go to (Radio) Luxembourg and see Barry Alldis and Don Moss and whoever else was in at the time. You’d spend two or three nights there, go to the clubs and then you’d go to Cologne and take Bill out to night clubs. He’d say ‘OK, what is it?’ and you’d say ‘Well, Bill, it’s…’ and providing it was a halfway decent record it would go in. If it did, the next week it was worth the trip – it would be heard by millions and millions of people – there was nothing else to listen to. Then you’d write your cards over here. You’d have open cards – ‘Can you play any record by Michael Holliday’ and that gave the producer over here the opportunity to put on the latest record. Open cards were the things you always tried to get. Everybody used to write them but they would never use more than two in a programme. Some lunatics would try and write 20 postcards in a week which was obviously spotted as a fix. There were also times which came and went, when you had payola scares. 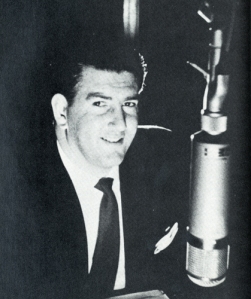 You had Two-Way Family Favourites and you had Housewives’ Choice, which was second best. The presenters changed every week so you never knew who the hell was coming on, The art was in trying to find out who it was so you could bombard them. It was the presenter who was the key, depending on who it was. If it was a well-known presenter they would say  ‘I will pick all all my own records’. Producers were quite powerful in those days, then the presenters were more powerful,then producers came back. It was my job to go round to Egton House and the Aeolian Hall where Saturday Club was done, all weekend programmes, see them, take them out if you could, and get to know then. There was also Midday Spin from 12 noon-12.30 and Roundabout in the evening – that was about it

You didn’t get involved with trying to get the band on instead of needle time?

No, you didn’t have bands then. I started in May 1958 – Cliff (Richard) started in September

The Company was still grappling with rock and roll?

The Company was very successful and as Norrie was doing what he was doing very successfully, why change? You had music publishers – they made their money from sheet music sales. They had to get their songs played on radio through live performances and were plugging bandleaders. Outside Norrie’s door there would be four or five music pluggers with their sheet music, no tapes, no cassettes, they would sit down at the piano, play their songs and sing them. From that Norrie has to choose whether he liked it, didn’t like it or ‘leave it with me’. All around Castle Street you could heard pianos being played – which is how I got to know all the publishers. Because I worked for Norrie I was a star in the eyes of the publishers. Because I was that close to Norrie, if they could get close to me, they could get close to Norrie. There were some characters in publishing, real old characters. Syd Green at Chappells was a lovely guy – his Christmas parties would start maybe on a  Monday morning four or five days before Christmas and go on until Christmas night, all day, never stopped. EMI’s parties were legendary, always at Abbey Road. Everybody went – it was like a Royal command. All the BBC producers, all the DJ’s, all of our artists, composers, songwriters, publishers – it was huge. It had to be in No.1 (studio) it was just so full. It was a lovely thing, but got hit on the head by (Sir Joseph) Lockwood.

A rare moment when the modest marketing/PR man got to the front of the picture…outside the legendary Manchester Square offices!

We moved into Manchester Square in 1960 and there was a huge ground floor room on the left hand side which was empty, no windows, where the conference room eventually was – it was initially on the first floor. On the third floor – it took up the whole floor – was the computer; air conditioned, high security locks, nobody could get in. (and here it is, the EMIDEC 1100)

What was that for?

It was one of the first computers ever made and we made it, we sold them. I think they were a million pounds each. Within a few weeks they all went wrong. Lockwood hadn’t long started, the company was going down the tubes when he started. He had to go to the City every Friday to get wages which he found very difficult. We were making gramophone records, gramophones, TV’s, radios – I’ve got an HMV razor -anything electric we made. So many people doing so may things. He then sold off, under licence, all the TV’s to Thorn, Marconi, HMV, Ferguson when he realised the records were a really good cash flow project. He had to turn the company around. When it first started, as you know, it was a sewing machine company down in Clerkenwell – the guy to have spoken about it was Bob Dockerill. He told me they really didn’t know whether to forget records and just make sewing machines, or the other way around. What a choice to make in those days, just coming out of cylinders, you couldn’t envisage what would happen. The publishers made all their money out of sheet music. If (a song) was played on the radio, all the music stores around the country would have their sheet music and dances bands by the million had to go and buy the arrangements. You try and buy an arrangement today – I bet you can’t do it.

(If I may add a line or two about Bob Dockerill who was still with EMI in the 1980’s.  For a man who was at one time the final arbiter over both the producer and the marketing manager on whether a record was actually released, his final job for the company was to be in charge of deletions – removing and ordering the destruction of those records that were no longer selling. He did the lists by hand and, unbelievably, I was his last boss though I failed to take advantage of his huge knowledge of the history of the company. He tell me of the day we was cycling in East London in about 1920 and saw a sign in the window for an office boy at The Gramophone Company, but he died in 1987, aged 81, by which time I am certain he was the only person in Manchester Square still wearing a suit and tie. I regret never having taken the opportunity to talk to him)

Next time we move on to the Cliff Richard era.